The story behind Mimosa hostilis

What is Mimosa Hostilis?

From the midst of the mountains of Southern Mexico to the tropical forests of Brazil, the Mimosa tenuiflora grows, embracing in its trunk and roots a long list of benefits and traditions.

It can pass unnoticed like any other tree between bushes and resilient plants, but the regenerative properties of Mimosa hostilis have been well known since ancient times. Pre-Hispanic civilizations –Mayas, Nahuas, Amazonian indigenous people, among others—have used it to treat tissue damage, as a key ingredient in cosmetic treatments, and as an essential part of their rituals.

We, at The Mimosa Company, want to share with you the knowledge and traditional uses that surround our beloved Mimosa tenuiflora. 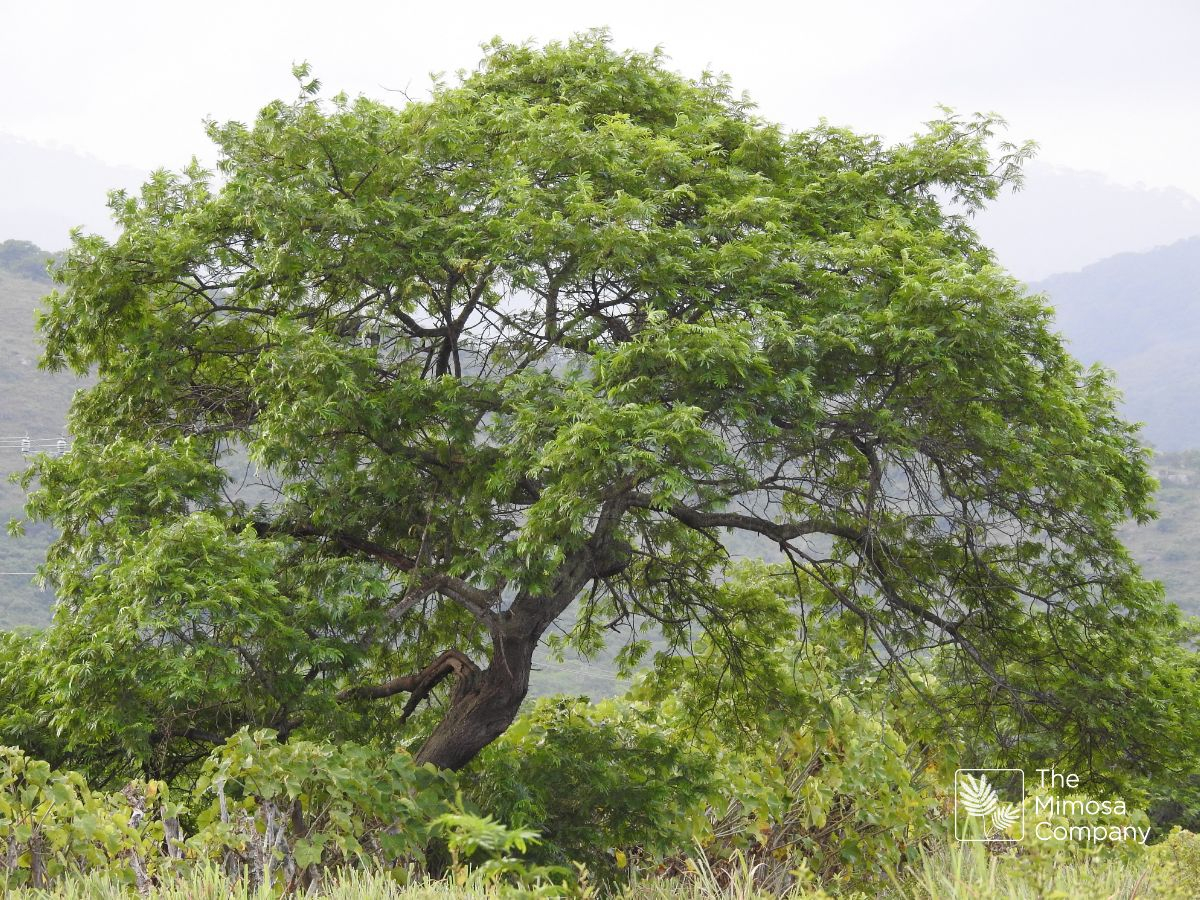 All the names for Mimosa tenuiflora

This amazing tree has many names. Its full scientific name is Mimosa tenuiflora (Willd) Poiret, but Mimosa hostilis is used as a synonym. However, there was a time scientists believed it was different from Mimosa nigra (Brazil) or Mimosa Cabrera (Colombia) 1, lately, they realized the taxonomic descriptions were the same.

Popularly, tribes from northeastern Brazil call it jurema or jurema-preta. The last one is to make a distinction from jurema-branca, another mimosa species.

Meanwhile, in Mexico, it is called tepezcohuite, but many traditional herbalists refer to it just as "skin tree", for most of its uses are related to the treatment of ailments or injuries of the skin.

The meaning of the word tepezcohuite –also written as tepescohuite or tepexcohuite—is unclear and still a matter of debates. However, historians and botanic researchers agree on two theories:

1. The first one is related to the dictionary of Aztequisms, an early 20th-century attempt to understand and recover the Nahuatl, which is the original language of the Aztecs. In this book, we can find the words “tepecuitazote" (described as a medicinal plant) and, "tepehuiscle" (a hard tree) 2. Both meanings suit the Mimosa tenuiflora exceptionally well.

The origin of these words comes from the sum of two other words in Nahuatl: Tepetl (hill) and, cuahuitl (tree).

2. The second theory is related to the Nahuat language. This language is a variant of Nahualt, spoken by the indigenous people of the northeastern highlands of the State of Puebla, which is a couple of hours drive from Mexico City. In their dictionary, they use the word “teposkuouit” to describe a "tree hard as iron", whose pronunciation sounds similar to tepezcohuite. 3

Although the origin of the word Tepezcohuite is uncertain, it is clear that none of the words in Nahuatl or Nahuat related to it mean “skin”. Nevertheless, the common definition for this tree in Mexico is related to its usage. For instance, in the Dictionary of Mexicanisms, a contemporary recompilation of Mexican terms, tepezcohuite is defined as "a medicinal plant of whose bark is used as an analgesic, fungicide, repairer and, stimulant for dermis regeneration".

The strength of Mimosa hostilis

The Mimosa hostilis grows in landscapes covered by bushes; typically, in an ecosystem known as a tropical deciduous forest. Life is not easy in these places: the dry seasons are long and harsh, while the rain period is always torrential. Despite such an extreme climate, our beloved tree grows, strong and resilient, ready to adapt to any circumstance. For this reason, it is common to find it throughout the Americas.

In Mexico, from early November until June, the Mimosa hostilis pleases us with small soft and hairy flowers which eventually become into fruity small pods. Being a tree that adapts to difficult conditions, it is easy for it to grow on the edges of roads and abandoned and hostile terrains. In its early life, up to nine trees can grow in one squared meter, although an adult tree can reach eight meters’ height. 4

Its small leaves and delicate flowers stand out among the undergrown bushes that surround its habitat, but it is the bark of the trunk and roots that hold its medicinal properties. 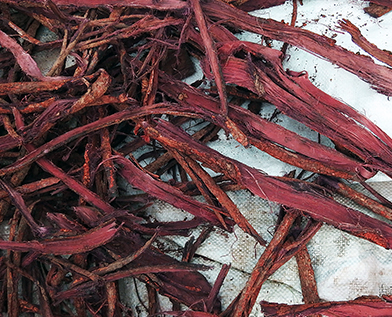 Although many indigenous communities have tepezcohuite powder or infusions in their traditional recipes to treat skin wounds, infections, and inflammations, it was not so popular some years ago.

The knowledge was recovered during the 1980s when two tragedies struck Mexico: in 1982 a volcano erupted in Chiapas, southern Mexico, and in 1984 a gas system exploded near the nation's capital. Without sufficient hospital care, people had to rely on traditional knowledge to care for the victims' injuries. That was the moment when Mimosa hostilis became one of their best allies.

By grounding the tepezcohuite bark, traditional doctors in different indigenous communities produce infusions, balms, and soaps, specially designed to regenerate the skin, but also to treat stomach illnesses, vaginitis, and fungal infections on the skin 5 6 7.

Mayans of the Yucatan Peninsula clean wounds and pimples by applying the powder obtained from the Mimosa hostilis’ bark by roasting, grinding, and sifting it on the affected area. This method is not only useful for humans, but for domestic animals too! Herbalists mix the bark with water and boil it until it becomes a concentrate. They use that water in compresses on superficial wounds. They also gargle with it in the presence of abrasions in the mouth. 8

In Brazil, the knowledge of the use of jurema was shared by the indigenous tribes of the amazons to afro-descendant groups, who use it to produce extracts to treat infections and inflammations, as well as in religious ceremonies. 9

The well-known anti-fungal, anti-microbial, and wound healing properties of Mimosa tenuiflora are not the only reasons people trust it. The regenerative properties of the root bark powder have been a great ally in beauty routines. Since ancient times, grandmas share their little secret with their daughters and granddaughters: the use of tepezcohuite as a natural anti-aging treatment and key for maintaining their hair healthy.

The soaps and oils of tepezcohuite are used by indigenous women in their beauty treatments. These natural products help them to fight acne, avoid the appearance of wrinkles, spots and stretch marks from pregnancy. They rely on the Mimosa hostilis to take care of their long, thick and abundant hair, controlling dandruff and stimulating growth 10.

In 2015, during an interview with Elle magazine, Hollywood actress Salma Hayek, said she uses Mimosa tenuiflora as part of her beauty routine, preferring it over botox. She was surprised that the use of tepezcohuite was little known in the USA. In 2011 she launched a line of cosmetics, skincare and haircare products with Mimosa tenuiflora as a key ingredient.

What does science say about Mimosa hostilis?

It was not until a few years ago that the pharmacological and medical effectiveness of Mimosa hostilis started to be tested in experiments. There are reports confirming that extracts and by-products of this tree are useful for treating wounds, infections and skin illnesses like psoriasis.

In a study published in 2006, an extract of Mimosa tenuiflora was used to treat leg ulcers. Under controlled conditions, they found that the entire group that used the extract in a hydrogel reduced the wound by more than 90% by the eighth treatment, whereas only one person in the control group had achieved a similar recovery. Furthermore, no side effects were observed in the test group. 11

The bark of Mimosa hostilis contains tannins, saponins, polyphenols, an alkaloid fraction, lipids, phytosterols, glucosides, xylose, rhamnose, arabinose, lupeol, methoxychalcones, and kukulkanins. The healing properties of extracts obtained from the bark have been scientifically studied, attributing the main biological activity to its tannin and saponin content. 12 Studies include clinical trials of phytodrugs based on Mimosa tenuiflora bark extracts for the treatment of venous leg ulcerations, like the one we previously described.

In different experiments, scientists found that extract of Mimosa tenuiflora, mainly its tannins, has helped to combat bacteria such as Micrococcus luteus and Bacillus subtilis and fungi like Microsporum canis, Microsporum gypseum, Trichophyton mentagrophytes, Trichophyton rubrum, and Chaetomium indicum, and that a combination with ethanol was effective against Candida albicans. 12