Inside the Mimosa tenuiflora tree: understanding its chemical compounds

2. Which are the chemical substances found in Mimosa tenuiflora?

2.1.2 Mimonosides A, B & C and Lupeol (Triterpenoid Saponins)

Pharmacognosy is a fancy word, coined by the German botanist Seydler1, to describe the study of the chemical compounds that can be extracted from natural sources. It focuses on how these chemical substances can be used in medicine. It is a discipline whose main principles are arguably as old as civilization itself, since the use and study of naturally extracted chemical substances, is found in a multitude of ancient cultures.

Pharmacognosy can be viewed as the scientific and chemical development of “ethnobotany”. Ethnobotany is the study of traditional medicine employed by shamans and or village doctors of various ethnic and indigenous groups2; These ethnic groups would often try and test various extracts from plants and animals to discover their beneficial or often nefarious effects on the human body. Unlike the shamans however, current day pharmacognosy employs a large variety of technological equipment and advanced methodologies to extract and identify the chemical substances found in plants and animals. Once a substance is extracted, the next step of pharmacognosy is to identify the potential medicinal uses it may have. This part of the study is often performed in the lab via cell cultures or animal toxicology studies.

Which are the chemical substances found in Mimosa tenuiflora?

Various benefits are associated to the Tepezcohuite tree, which is the common name of Mimosa tenuiflora in Mexico. The bark of Tepezcohuite has been used in various traditional medicine recipes and it is a common ingredient in skin care products. Fully grasping the pharmacognosy of Mimosa tenuiflora will enable us to determine which compounds have medicinal or cosmetically useful properties. This would in turn allow us to isolate these key ingredients and embed them into products so that consumers can maximally benefit from the wonders of the Mimose tenuiflora tree. What follows is a short description of some of the substances found in Mimosa tenuiflora and their known effects or potential uses. This is by no means an exhaustive list, and we aim to improve and update this page as we come across new information. 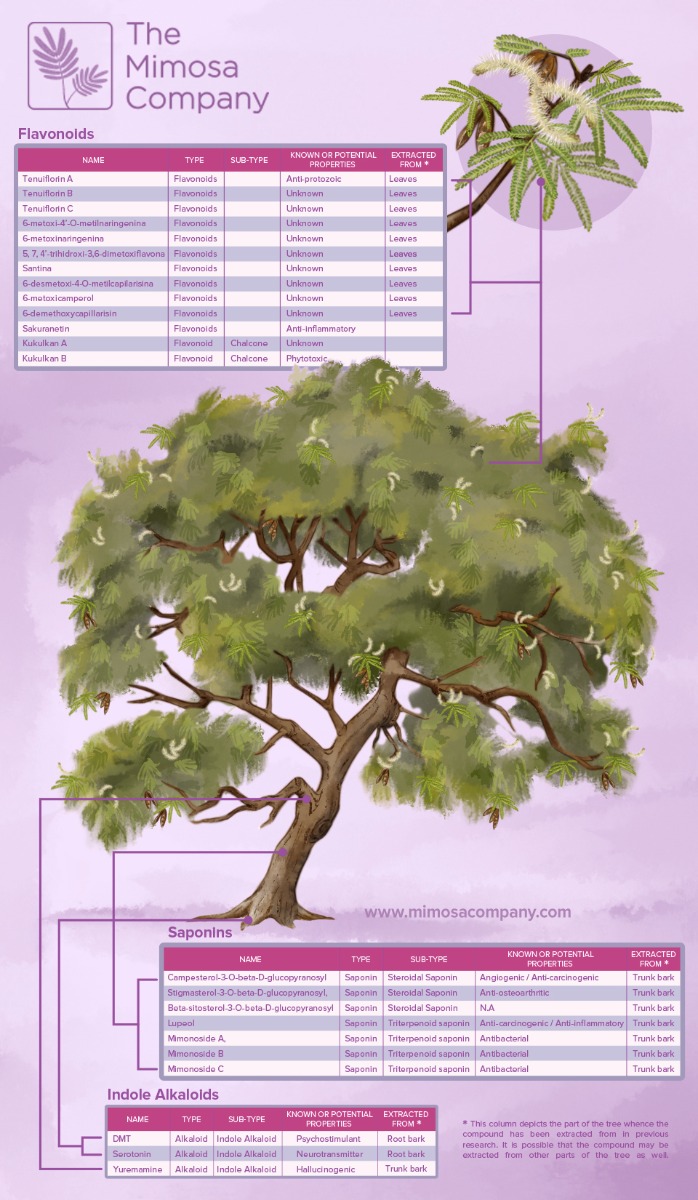 Saponins are a group of molecules often found in plants. They share structural similarities with glycosides (sugars) but vary greatly in their pharmacological properties. Such properties can range from anti-bacterial, anti-fungal, anti-inflammatory, anti-parasitic, anti-viral and anti-tumor3. As a result, saponins are often used to make soaps and detergents, but have also been used and investigated by the cosmetic and pharmaceutical industry due to their aforementioned potentially useful properties. Interestingly, traditional Chinese medicine, which focuses on the use of naturally occurring plant compounds and derivatives, may owe many of its biological effects to the saponins found within4.

These three distinct steroidal saponins were extracted from the stem bark of Mimosa tenuiflora in 19935. To the best of our knowledge, no research has yet been done on the precise pharmacological effects of any of these steroidal saponins. However, previous work on similar (but not identical) campesterol and stigmasterol compounds have demonstrated potential angiogenic and anti-carcinogenic properties (campesterol6) and anti-osteoarthritic properties (stigmasterol7). We were however unable to find any information on the potential pharmacological properties of beta-sitoserol-3-O-beta-glucopyrnosyl. 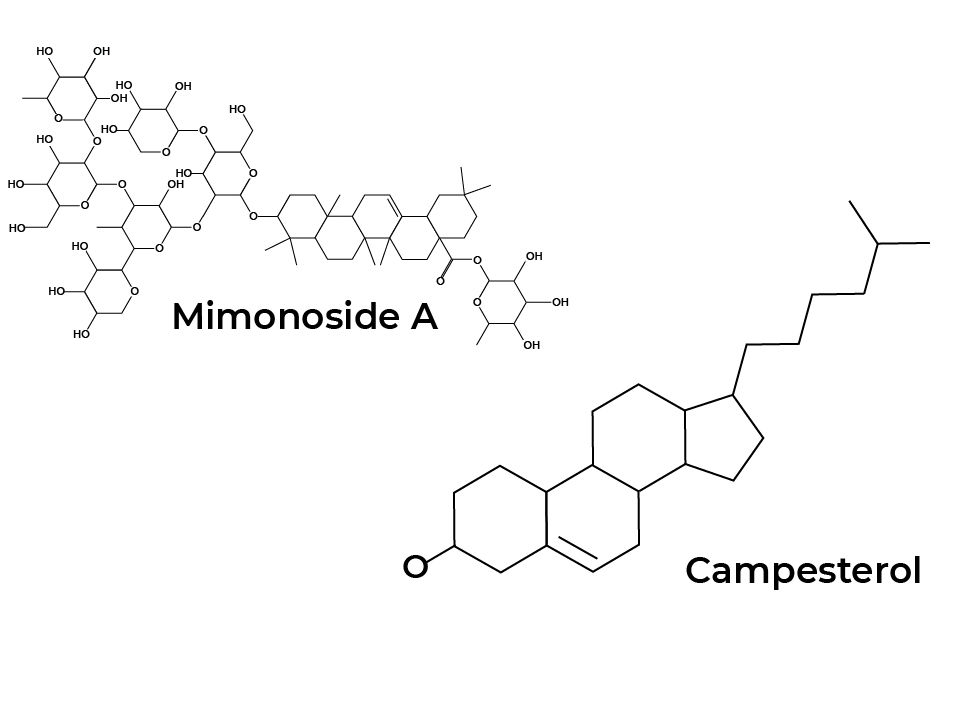 Mimonosides A, B & C and Lupeol (Triterpenoid Saponins)

The mimonoside saponins are named as such since they were first discovered in the Mimosa tenuiflora tree. They have been shown to have immunomodulation properties as well as the ability to induce the proliferation of cultured mouse cells5 8. Although it is speculated that these saponins play a role in the skin-healing properties of the Mimosa tenuiflora extract, this has yet to be confirmed scientifically9.

Lupeol, another triterpenoid saponin, has also been isolated from Mimosa tenuiflora. Lupeol has been more heavily researched as opposed to its other triterpenoid counterparts and it has been shown to have strong anti-inflammatory and anti-carcinogenic properties10.

Upwards of a dozen different types of flavonoids have already been extracted from the Mimosa tenuiflora plant. However not much is yet known about their pharmacological effects despite their great potential.

Some of the flavonoids that have been extracted from Mimosa tenuiflora tree are: Tenuiflorin A, B & C, kukulkan A & B and Santina; to name but a few12. 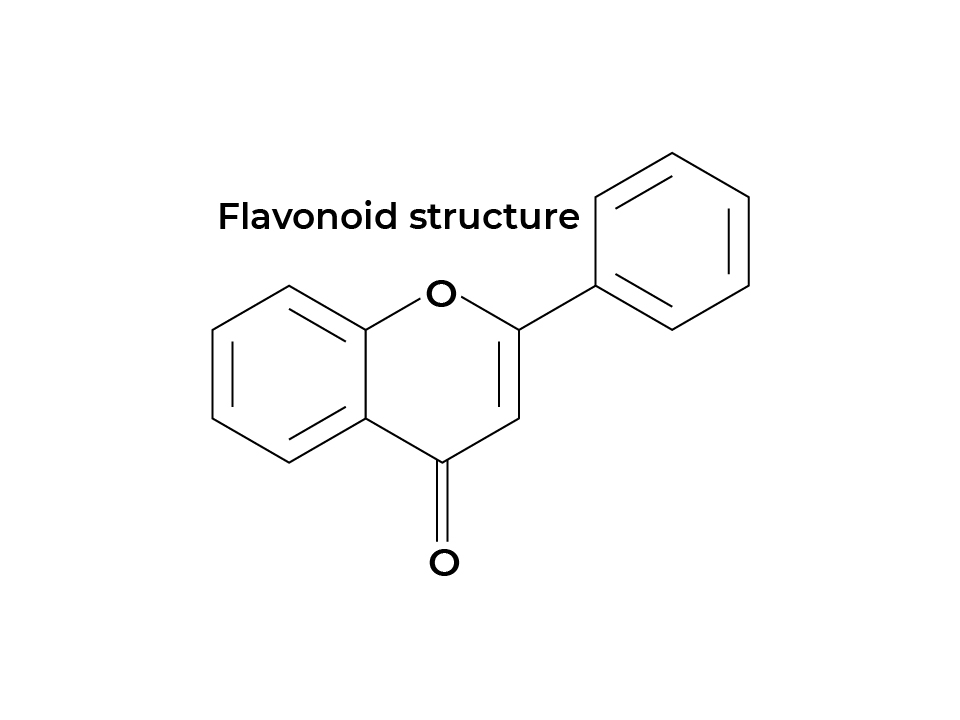 Indole alkaloids have harnessed a lot of attention due to their psychoactive effects. These chemicals are manufactured in plants and animals by conversion of the amino-acid tryptophan. Serotonin is a prime example of an indole alkaloid which is produced in humans and serves as a neuromodulator in the brain. Interestingly, serotonin can also be extracted from Mimosa tenuiflora.

DMT is extracted primarily from the bark on the root of Mimosa tenuiflora. This compound has acquired plenty of interest from scientists, and recreational users, due to its potent hallucinogenic effects. It is also the active ingredient in various shamanistic and religious rituals13. Studies have shown that apart from the acute cardiovascular effects (increased heart rate and blood pressure14), DMT poses low toxicity risks15 16. Nevertheless, it is a powerful agent capable of inducing intense feelings of fear, paranoia and anxiety; all of which can produce immediate and long-lasting psychological effects on the user15.

Although DMT can be found in low concentrations in human brain tissue, its precise role in brain functioning is still poorly understood. It is thought to be produced in the lungs and adrenal glands instead of the brain17. When it reaches the brain however it is known to bind to a variety of brain receptors such as serotonin, dopamine, acetylcholine and glutamate receptors. All these receptors play important roles in either behaviour, emotion and/or distinct states of awareness.

Unfortunately, not enough research has been performed on this agent to conclude whether it would have any beneficial clinical use. Future research may provide answers to speculations that DMT may be used as treatment for substance abuse or anxiety related disorders15.

Serotonin can also be extracted from the root bark of Mimosa tenuiflora. Unlike DMT, serotonin’s role in brain physiology is significantly more well established. This neurotransmitter is found in and plays an important role in sleep and wakefulness, cognitive flexibility as well as in the neuromodulation of positive moods and emotions18 19. Moreover, this molecule’s impact on the human body extends beyond the brain since it is also able to act on the cardiovascular and digestive system18.

Likely, the most studied aspect of serotonin is its role in depression since arguably some of the most potent anti-depressants are Serotonin re-uptake inhibitors (SERT’s). Roughly speaking SERT’s are compounds which elevate the levels of serotonin in the brain to help modulate mood. It is possible that the extraction of serotonin from Mimosa tenuiflora can be used in the future for scientific and research purposes.

Unfortunately, there are still no studies looking into the pharmacological effects of Yuremamine. It is our hope that academic researchers and pharmaceutical companies alike will soon decide to explore this promising alkaloid. One speculated property is that it acts as a MAO (monoamine oxidase) inhibitor20.

With such a rich chemical profile, it is easy for us to get excited about the new applications that could be discovered for Mimosa tenuiflora in the future. The traditional uses known for this tree in the Americas, are as varied as the names it has received. If you want to know more about the different ways that this amazing tree has been used by indigenous and rural communities, then make sure to read our article about the traditional uses of Mimosa tenuiflora.